It’s Their Turn To Eat

For the second time in less than two months, Nigerian journalists are at the centre of a needless and embarrassing controversy. Some of the reactions to the appointment of a Special Adviser on Media and Publicity to the President of the Senate have been downright petty, so much so that it would have been funny if it were not pathetic. Coming barely two months after the disagreement that attended the Nigerian Guild of Editors (NGE) elections, it must worry everyone who cares about the media.

There is no point wasting time on whether or not error was committed in appointing Dr. Festus Adedayo; or whether or not he is qualified for the job, people are doing a ‘poor’ job of that already. My reaction is the same with regards to the NGE issue, and I take solace in this attitude seeing the comments attracted by a response to allegations against the guild, written by Mr. Gbemiga Ogunleye.  Looking at people’s comments under Ogunleye’s write-up, I could tell many simply were not interested in the merits of the case he presented. Short of setting the record straight, you would be tempted to think he probably should have ignored the complaints against the Election Committee. I do understand his burden to set the record straight, having been an executive of the Guild but my attitude is borne out of a deep understanding of the communicative environment that convergent media has foisted on us. I will explain this much later.

Watching the unfolding drama about the appointment of a media aide to the President of the Senate, I have the same feeling: that Adedayo should refuse to engage with his traducers but, I also know that being who he is, a response is sure to follow. However, given what I know of this environment, I am sure that as it happened in the case of the response by Ogunleye, this would be nothing more than setting the record straight.

I’ll start with what I make of incidents like these and then explain how and why, sadly, we’ll be seeing more of them. Probably because of the privilege of moving from the newsroom into a corporate communication position, I know that the general view of journalists and the media is anything but complimentary. I believe one explanation for this is the penchant of journalists to often exploit official roles for personal profit. Lanre Idowu’s brilliant article, ‘Corruption in the media: The brown envelope syndrome’ takes an extensive look at some of the ways this is done. Those who are perceptive enough would notice that some of the loudest critics of Adedayo’s appointment appear to be suggesting, among other things, that since he did not work for the Senate President’s victory, he should have ruled himself out of the position. In other words, it is the turn of those who worked for their President of the Senate of his party, the All Peoples Congress (APC) to occupy the position – or in plain language, ‘their turn to eat.’ This in itself can be interpreted in many ways, but the bottom-line is that a media that encourages senior journalists to double as public relation consultants can’t be hardly be trusted. The ethics of the job demands that you maintain some professional distance from those you are reporting, but we’re in an era where it’s okay for journalists to own PR agencies and playing by the rules is seen as odd. The practice of using the platform of a publication is probably as old as the history of the press in Nigeria, but it has to be said that in the convergent media environment, its brazen manifestation is more worrying.

Whereas the practice of the Nigerian media, of not reporting each other, had helped to keep these sorts of issues out of the public gaze, it is more difficult to hide in the convergent media. Like much of the rest of the country, the Nigerian media has historically been fractionalised, its foundation having been laid in the divisive politics of British colonialism. The early press served their political-activist founders, pre, and post-independence; to be deployed against local opponents within their regions and at the national level as well. The problem now is that the convergent media has democratised the recklessness of those days.

The question has to be asked: Does the phenomenal growth in the number of media outlets – both traditional and new media – represent diversity? Traditional media is essentially elitist, with government officials, corporate figures, and others like them dominating the conversation. So, on face value, it’s tempting to think that the growth in the number of media outlets represents progress. The ecosystem of convergent media does not support this optimism, however, and unfortunately, in this era, more does equal less. There are two main reasons for this.

One of the unfortunate effects of the convergent media environment is the development of echo chambers, where we are actually speaking with less and less people even though the Internet and new media allows us to reach millions across the world potentially. So, our experience now is we have people unfriending others on social media platforms like Facebook because they hold a different opinion. In essence, rather than enlarging our level of consciousness by engaging in rigorous discourse, we are amplifying and reinforcing our narrow beliefs by communication and repetition inside a closed system. Notice how contrary opinion is shut down, most times with the one holding it unfriended and blocked on Facebook, and you have an idea of how this works.

Related to this and perhaps more frightening is the fact that we are in the post-truth era, where people push alternative facts. Defined as ‘relating to or denoting circumstances in which objective facts are less influential in shaping public opinion than appeals to emotion and personal belief’ by the Oxford English Dictionary, which picked it as its word of the year in 2016, this phenomena explains the sometimes senseless and needless chatter on social media. Observe that no matter what facts you provide, the ‘mob’ is not interested. Emotions and their narrow personal beliefs rule them.

If we understand and can explain what is happening, making sense of why is far more difficult. For, why would a people, sometimes well-educated, refuse to see reason even in the face of what should be undeniable evidence? Difficult to answer, but just a few observations. Rising nationalist sentiments around the world are one way of making sense of communication in the post-truth era but are not the only ones. In the United States and the West, that might be the case; but certainly not in Nigeria.  While we can say for certainty what nationalist and far-right politics stand for; there are no identical political ideologies in Nigeria. You might be tempted to think people would take sides based on tribe, but that’s not what we are seeing. Support for and opposition to people aspiring to office cut across clan sentiments as far as we can see.

Politics being the biggest business in town for now, and in the absence of any ideological differences between the existing political parties; the only thing that makes sense is that the ‘fights’ are simply about money. Media practitioners, ex-journalist who say they are political consultants all want to position themselves for a piece of the action, which is fine. If it’s their time to eat, they should at least do so without dignity. However, masking their real intention with half-truths, alternative facts or outright disinformation is not just disingenuous but offensive to right-thinking people.

So, how do we deal with these smooth operators? For one, you could ignore them, especially since we are in the post-truth era and they won’t ever see reason but that would be honouring them and making them feel good. The serious media community across the world is mobilising and investing heavily in fact-checking projects, and that’s because the best way to still fight misinformation is with facts. So, where you can, and it would help others from being consumed by the culture of deceit, provide the facts. Lastly, if you can, without wasting time going down to their level, use superior reasoning and arguments. At least, it would be on record that you have done your part.

The President’s Right, You Need More Than A Degree To Make It

akinolaniyanBLOG, SOCIETYApril 4, 2019
Just when you think you’ve seen it all, along comes something new to remind you that Nigeria is one exciting …
END_OF_DOCUMENT_TOKEN_TO_BE_REPLACED

akinolaniyanSOCIETYMay 4, 2020
You can be forgiven if you think the present administration’s failure with regards to its communication began only last Monday …
END_OF_DOCUMENT_TOKEN_TO_BE_REPLACED 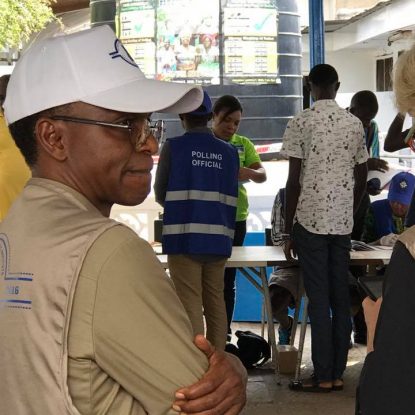